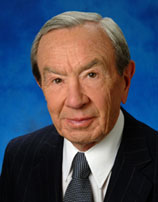 Conversation with the Honorable Warren Christopher

Please join us for an enlightening discussion with former Secretary of State Warren Christopher, who will provide his views on the global geo-political environment. Mr. Christopher’s long and distinguished career includes top-level positions in the Johnson, Carter and Clinton administrations. He was awarded the Medal of Freedom, the nation’s highest civilian award, for his role in negotiating the release of American hostages held by Iran. The author of several books, Christopher also has been active in Los Angeles civic affairs. The discussion will be moderated by Holmes Osborne, a private money manager who speaks frequently at investor conferences and is the host of Money Confidential on Santa Monica 16 and Los Angeles 36 public television. There will be a question-and-and answer period.
Speaker Bio:
Warren Christopher was born in Scranton, North Dakota, on October 27, 1925. He received an undergraduate degree magna cum laude from the University of Southern California in February 1945. From July 1943 to September 1946, he served in the Navy, including active duty as an ensign in the Pacific Theater in 1945. He attended Stanford Law School from 1946-49, where he was President of the Law Review and was elected to the Order of the Coif.
From October 1949 to September 1950, Mr. Christopher served as law clerk to Justice William O. Douglas of the U.S. Supreme Court. He practiced law with O’Melveny & Myers from October 1950 to June 1967, becoming a partner in 1958. Mr. Christopher served as the Deputy Attorney General of the United States from June 1967 until January 20, 1969, after which he rejoined O’Melveny & Myers.
From 1977-81, Mr. Christopher served as the Deputy Secretary of State of the United States. President Carter awarded him the Medal of Freedom, the nation’s highest civilian award, on January 16, 1981, for his role in negotiating the release of 52 American hostages in Iran. Mr. Christopher again rejoined O’Melveny & Myers in 1981, serving as Chairman of the firm from 1982 to 1992.
In 1991, Mr. Christopher was Chairman of the Independent Commission on the Los Angeles Police Department. In the aftermath of the Rodney King incident, the Commission proposed significant reforms of the Los Angeles Police Department that were approved overwhelmingly by a public referendum. In 1992, Mr. Christopher headed the search for Governor Clinton’s running mate (Senator Al Gore), and later served as Director of the Presidential Transition process. On January 20, 1993, Mr. Christopher was sworn in as the 63rd Secretary of State, and served until January 20, 1997. He rejoined O’Melveny & Myers as the firm’s Senior Partner on February 1, 1997.
Mr. Christopher’s civic activities have included service as President of the Board of Trustees of Stanford University; Chairman of the Board of Trustees of Carnegie Corporation of New York; Director and Vice Chairman of the Council on Foreign Relations; and Vice Chairman of the Governor’s Commission on the Los Angeles riots of 1965-66. He received the first Los Angeles Civic Medal of Honor (2003). He is a fellow of the American College of Trial Lawyers, a former chairman of the Federal Judiciary Committee of the American Bar Association, and former President of the Los Angeles County Bar Association. He is a member of the American Academy of Arts & Sciences. He is currently Co-chairman of the Pacific Council on International Policy; Co-chair of the National War Powers Commission; Instructor, UCLA Undergraduate Honors Program; and member, Los Angeles Civic Alliance. In the 2000 presidential election, he was asked by Vice President Gore to head the search for his running mate (Senator Joseph Lieberman).
He has authored several books: Chances of a Lifetime (published in 2001 by Scribner), In the Stream of History: Shaping Foreign Policy for a New Era (published in 1998 by Stanford University Press), American Hostages in Iran (A collection published in 1985 by Yale University), Diplomacy, The Neglected Imperative (privately published, 1981), and Random Harvest (privately published, 2005).

Moderator & Event Chair:
Holmes Osborne, CFA is a private money manager, founder of investment newsletter www.stockroyalty.com, and writes financial articles. Holmes is host of Money Confidential on Santa Monica 16 and Los Angeles 36 public television and spoke at the Fifth Annual Value Investor Conference. He has a degree in finance from the Martin J. Whitman School of Management at Syracuse University and holds the Chartered Financial Analyst designation.  Holmes is a member of the Pacific Council on International Policy, president of the Malibu Rotary, member of Business Forum International, and formerly on the board of the LA National Association of Business Economists. Publications that his articles have appeared in include: The Motley Fool, TheStreet.com, and Quality Stocks for Women.

Credit card payments will not  be accepted, nor should be given, by phone or email.