Santa Barbara Luncheon Series - The Obama Doctrine and Beyond: Challenges for the President-elect

The incoming U.S. leadership is likely to implement substantial revisions to the objectives and conduct of U.S. foreign policy. Under President Obama, many Europeans have grown concerned about a possible decrease in America’s commitment to transatlantic relations, and by Russia’s military moves aimed at altering the existing balance of power.

For the past eight years, the Obama doctrine provided both the vision and the operational guidance for American foreign policy. However, recent statements by the presidential candidates and opinions expressed by national security experts voiced reservations about the doctrine’s intellectual underpinnings and its relevance to the strategic demands of world politics today. The central issue is that of America’s commitment to global leadership, including the security guarantees for NATO, Japan, South Korea, and other democracies.

This presentation’s discussion points will be on the role of presidential foreign policy doctrines in the American constitutional and political systems, the evolution of the President’s global perspective from the “Bush Light” to the Obama doctrine, the American choice between “leading from behind or leading from the front,” and more. 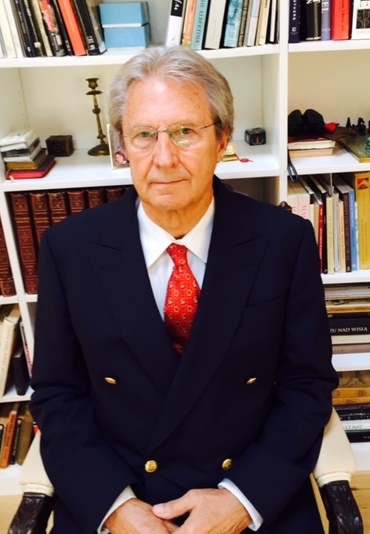 Arthur R. Rachwald  | Arthur Rachwald was born in Poland, where he began his academic career lecturing on jurisprudence after earning his law degree from the University of Marie (Curie) Sklodowska. After immigrating to the United States in 1969, he received a Ph.D. in international relations and public law from the University of California at Santa Barbara, and completed post-graduate studies at Stanford University’s Hoover Institution, and at Harvard University’s Russian Research Center.

In 1980, Arthur joined the Political Science faculty at the United States Naval Academy in Annapolis, Maryland. He advanced through the academic ranks and in 1990 was promoted to a full Professor, concentrating his research on transatlantic relations, Russian politics, and American constitutional law. He has published four books, and authored over 20 scholarly articles, as well as numerous academic papers and commentaries.

Concurrent to his tenure at the Naval Academy, he was actively associated with the School of Advanced International Studies (SAIS) at the Johns Hopkins University, both at the Washington, D.C. and Bologna, Italy centers, and with the Diplomatic Academy in Vienna, Austria.

Among his duties at the Naval Academy, he chaired the Political Science department, comprising over 40 civilian and military faculty and a student enrollment of approximately 500, and served a number of Academy-wide committees, among them the Trident committee for distinguished scholars and the Tenure and Promotion committee. He is the recipient of several research and teaching rewards, as well as two service awards bestowed by the Chief of Naval Operations: the Meritorious Civilian Service Award and the Superior Meritorious Civilian Service Award. In 2014, he retired from the Academy with an honorary degree of Professor Emeritus granted by the Secretary of the Navy. With his wife Anna, he lives in Santa Barbara, California, and continues his academic endeavors as a visiting professor and lecturer at the Diplomatic Academy in Vienna, Austria.
Payment Information
We accept the following:

Cancellations
Cancellations must be received in writing by 9:00 am the day prior to the event to receive a refund. No phone cancellations are accepted. Please fax to the CFALA office at (213) 613-1233 or e-mail info@cfala.org. Member “no-shows” will be billed the difference between the member fee and the non-member fee for the event which is posted on the CFALA website.
Chair:
Falko Hörnicke, CFA®, CFP® & George Tharakan, CFA