Welcome to the inaugural issue of the CFALA e-newsletter, a periodic publication with stories about noteworthy events and programs sponsored or hosted by the society, guest articles by members, book reviews, and other items of interest to CFALA members. Click on the headlines below to read the full stories. And if you’d like to contribute a story suggestion or, even better, write an article, we’d love to hear from you. Please email Executive Director Laura Carney at laura@cfala.org or steve@silverfoxco.com. 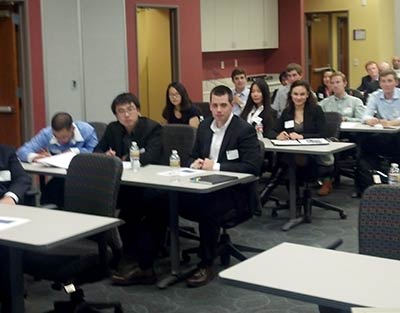 They probably won't make the stock price fluctuate, but a lot of thought and effort will go into the research reports on Jacobs Engineering Group in this year's "Investment Olympics," a student competition more formally known as the CFA Institute Research Challenge.

Teams from seven colleges were on hand Nov. 30 to hear a presentation by John Prosser, Jr., Executive Vice President - Finance and Administration, and pepper him with questions about the Pasadena-based provider of technical, professional, and construction services, which had global revenues of more than $10 billion in 2011. By Feb. 1, 2013, each team will produce a written research report with a buy, sell or hold recommendation – and then defend their opinion three weeks later before a panel of investment professionals.

"The presentation to the judges is an opportunity to see who really understood the company," said Ned Downes, CFA, a UBS Investment Associate who this year chaired the local competition sponsored by CFALA. "A written report is great, but there's no substitute for getting the students in front of you to see how they respond to questions."

Winning teams from Los Angeles and Orange County, where the CFA Society of Orange County is hosting a similar event, will advance to the next round in Toronto, where they will face teams from throughout North and South America. Winners of the Americas matchup will meet their counterparts from Europe and Asia at the global final in London in April.

"It&'s a wonderful competition and gives students the chance to apply what they've learned in the classroom to a real-world research assignment," Downes said.

More than 3,000 students from over 650 universities, 89 businesses, and 106 societies in 55 countries and territories participated in the 2011-2012 CFA Institute Research Challenge. Since 2006, when it was introduced to a global audience, almost 10,000 students have participated in the competition, learning best practices in equity analysis, report writing, and presentation skills.

Mark your calendars now – there's a top-notch lineup of presenters for the annual Economic & Investments Forecast Dinner, which is set for Wednesday, Jan. 30 from 5:30pm to 8:30pm at the Omni Hotel is Los Angeles.

Notkin, who serves as a U.S., Non-U.S. and Global Equity portfolio manager in addition to his role as CGPCS Chairman, is also Senior Vice President of Capital Guardian Trust Company, Senior Vice President of the Capital Private Client Services Funds and a former member of the Capital Guardian Trust Company Board. Prior to joining CGPCS in 1993, he spent 18 years with Morgan Stanley, where he established the firm's presence on the West Coast, and also worked for E.F. Hutton in New York City.

Rosenberg's responsibilities as BlackRock's Chief Investment Strategist for Fixed Income include helping to develop the firm's strategic and tactical views on sector allocation within fixed income, currencies and commodities. Prior to joining BlackRock, Rosenberg spent nearly 10 years at Bank of America Merrill Lynch as the Chief Credit Strategist. His most recent role there included coordination of strategy across all Fixed Income, Securitized Assets, Credit, FX and Commodities and formulating tactical and strategic risk-taking recommendations for external clients and internal trading desks.

Rosenberg and his team at BAML were consistently ranked among the top Institutional Investor High Grade Strategy teams and General and High Yield Strategy teams.

Spence, who is responsible for the Multi-Strategy Portfolio Managing Director at Omers, has spent most of his professional life as an economist, strategist and research director on both the sell and buy sides. On the sell side, Spence was Global Head of Rates and FX Research at TD Securities, and Chief Economist for Canada at Deutsche Bank. Prior to joining Omers, Andrew had a strategic role at the Ontario Teachers' Pension Plan where he was responsible for asset-liability research and strategic asset allocation.

At Payden & Rygel, Cleveland is responsible for developing views on the U.S. and global economy. His research areas include macroeconomics, central banks and the money markets, money supply, credit cycles, housing, state and local governments and regional economics. Cleveland previously was a senior associate at David Taussig & Associates in Newport Beach, where he managed the firm's fiscal and economic impact studies and consulting services.

Sponsorship provides an excellent way to spotlight your company to current and potential clients. For additional information, please click here. 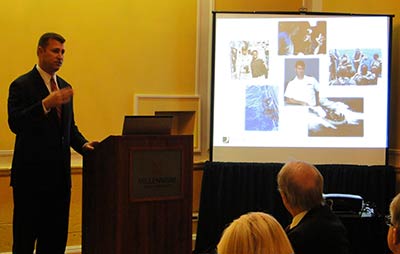 How can America best thank the thousands of disabled veterans who protected our country and now seek to re-enter society and live meaningful and productive lives? One approach was front and center on Nov. 7 when CFALA hosted a presentation by two distinguished servicemen who have left the battlefield behind and, with the help of the Wall Street Warfighters Foundation, are now investment professionals.

Speaking were retired Navy Lt. Cal Quinn, a Naval Academy graduate and former football star who was seriously injured while serving in Afghanistan immediately after 9/11 and now has achieved a successful second career in equities, and Sacramento native Eric Eberth, who served in the Marines and the Army, where he was an Apache attack helicopter pilot.

"I loved flying and assumed I'd always be flying," Eberth said in a recent interview. "But I was hit by an IED (Improvised Explosive Device) in northern Iraq and that was the beginning of the end of my military career. I was told I couldn't fly anymore. Now I have a second career in municipal finance, and I absolutely enjoy it."

Both Quinn and Eberth work for Drexel Hamilton, LLC, a full-service institutional broker-dealer whose mission includes offering meaningful employment opportunities to disabled veterans desiring a career in financial services. The firm, co-founded by Lawrence Doll, a scout sniper who was injured in Vietnam, and Gen. Peter Pace, former Chairman of the Joint Chiefs of Staff, parallels CFALA in its commitment to the highest standards of ethics. 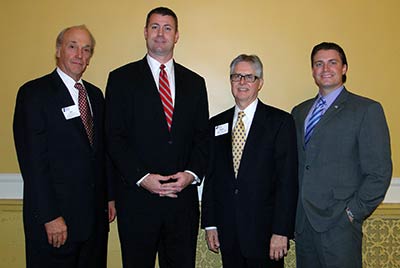 Quinn, who is now the firm's CFO, and Eberth went to work for Drexel Hamilton after graduating from a six-month training program offered by the non-profit Wall Street Warfighters Foundation, which so far has benefitted more than 50 disabled veterans. The Wall Street Warfighters Foundation has received generous support from the CFA Institute and from CFALA, which has expanded its Active Duty CFA Review Streaming Media Program to include disabled veterans. The Streaming Media program enables members of the military and disabled veterans to study for the CFA exam online free of charge.

As Quinn and Eberth explained, the widespread use of roadside bombs (IEDs) has resulted in thousands of injuries that are now mitigated by excellent medical attention that allows the injured to survive the battlefield. As a result, they said, roughly one quarter of those who have served in combat are returning home with a permanent disability and attempting to re-enter society and take on meaningful employment to support their families and maintain their dignity.

Congratulations to all those whose hard work and perseverance earned them their CFA charters in 2012!